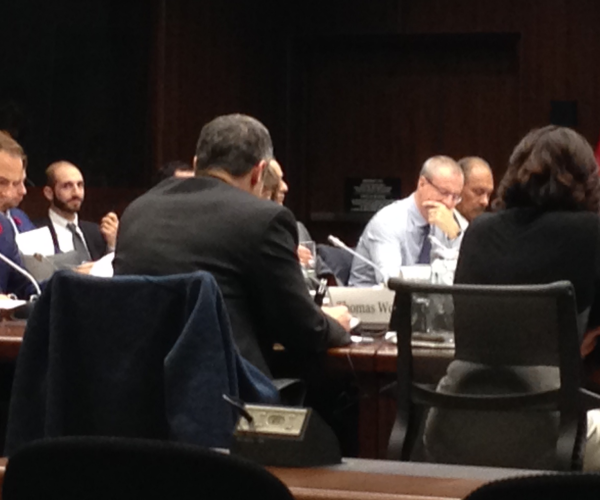 Good morning. My name is Thomas Woodley and I am president of Canadians for Justice and Peace in the Middle East (CJPME).  First, I wish to thank the committee for the kind opportunity to speak to you this morning.  It is a privilege to be here, and I look forward to a frank and honest discussion about Canada and its role in the sad realities of the international arms trade today.

CJPME is an organization whose mission is to empower Canadians of all backgrounds to promote justice, development and peace in the Middle East.  We have local activist groups across the country and we have approximately 125,000 Canadians who have participated in our activities or campaigns in the past.  Because of the devastating role that arms have played in the Middle East over the years, my organization has become increasingly involved in attempts to limit the flow of arms to the Middle East.

In an attempt to help the Committee understand the arms escalation problem in the Middle East, I provide the following statistics published by the Stockholm International Peace Research Instititute (SIPRI), in a report issued earlier this year: [1]

Clearly, the trends above run counter to the intents of the ATT, notably, the desire to contribute to international and regional peace; the desire to reduce human suffering; and the desire to promote co-operation, transparency, and responsible action by and among states. [2]

3 Emergence of the Arms Trade Treaty

CJPME was thrilled when the International Arms Trade Treaty (ATT) was first concretely debated in 2012, then adopted by the UN General Assembly in 2013, and entered into force in 2014.  However, despite our excitement at the adoption of the ATT by much of the world community, we were saddened and upset by the Canadian government’s reluctance to consider signing the treaty for much of the past several years.

It is important to note that at the same time that the ATT was creating greater hope for higher standards and greater transparency in the movement of arms around the world, Canada was negotiating one of its largest arms deals yet – with a serial human rights abuser: Saudi Arabia.  This arms deal has been in and out of the news over the past 2-3 years, with two successive governments providing shifting justifications for this sale, despite the fact that Saudi Arabia regularly ranks among the "worst of the worst" among human rights violators.[3]

In fact, a survey of Canadians in September, 2017 by Nanos Research for The Globe and Mail found that 64 per cent of Canadians “oppose” or “somewhat oppose” the Canadian government’s decision to sell light armoured vehicles (LAVs) to the Saudi government. [4]  Despite the fact that it’s common sense (as demonstrated by the survey results) that this sale should not have been approved, Canada’s existing export controls – as embodied in the Export and Import Permits Act (EIPA) – failed to prevent the sale.

There is clearly much to say about this sale, but it’s obvious that for a strong majority of Canadians, the current EIPA provisions did not properly function to prevent this sale.

When the Canadian government changed in 2015, CJPME was encouraged that there had been a campaign pledge to join the treaty, the promise stating, “We will ensure that Canada becomes a party to the international Arms Trade Treaty.”

We had high hopes that the new government would sign on to the treaty in a way which addressed the longstanding shortcomings of Canada’s existing arms export controls.  Nevertheless, when Bill C-47 was introduced, it was immediately clear that many of the fundamental objectives of the ATT were being circumvented through the provisions of the Bill, whether through omissions, through exclusions, or through deferral to regulations; whether intentionally, or unintentionally.

5 Disconnects between C-47 and the ATT

A witness for the government admitted that “Article 7 of the ATT requires each state party to consider a number of specific risks with respect to the items proposed for export, before authorizing the export to take place. […] The critical element was the need to create a legally binding obligation for the minister to take the ATT assessment considerations into account in deciding whether to issue an export permit.” [5] [italics added]

First, we must be clear that the ATT establishes strict prohibitions on arms exports depending on an objective risk assessment, and that simply requiring taking “considerations into account” will not satisfy Canada’s obligations under the treaty.

The witness went on to suggest that the ATT requirement was “most effectively” implemented through regulation.

5.2 The need to report arms sales to the US under the C-47 implementation of the ATT

A witness for the government suggested that accession to the ATT would not require Canada to track and report arms sales to the US. [6]  Nevertheless, a plain English reading of the ATT would suggest otherwise.

The government witness suggested that the ATT “does not specify how state parties should organize their export control systems.”  This may be a fair statement, as long as the export systems in question do not violate a nation’s obligations under the ATT.  However, Canada’s arrangement with the US under the Defence Production Sharing Agreement (DPSA) clearly does not meet Canada’s obligations under the ATT.

5.3 Avoiding a decision between our ethics and Canadian jobs

I suspect that privately, many of the Committee members are as uncomfortable as I am with Canada’s $15 billion arms deal with Saudi Arabia.  However, because proponents of the deal have positioned it as a choice between “questionable risks” on the one hand, and “Canadian jobs” on the other, the issue becomes a political hot potato.  It is not surprising that elected representatives in successive governments would take the approach that they have, given that the alternative would be a form of political self-flagellation.  As such, I would recommend that Canada’s implementation of the ATT include provisions to enable lawmakers to avoid this type of political catch 22.

Perhaps as the result of the role of the Canadian Commercial Corporation, the Saudi Arms Deal from the get-go was presented as a trade-off that would jeopardize good paying Canadian defence jobs in London, Ontario.  Under Canada’s accession to the ATT, the ethical issues should be addressed much earlier in the sales process, long before people are calculating the trade-off in Canadian jobs.

Naturally, a “legally binding obligation” on the Minister as required by the ATT could help prevent many morally questionable deals from even being considered.  But beyond that, CJPME would recommend that lawmakers look at other ways to segregate and “front load” the ethical considerations of a deal before the potential economic benefits of the deal are promoted publicly.  As mentioned above, there may be implications in terms of the ongoing role attributed to the Canadian Commercial Corporation.

6 Other Considerations and Conclusion

The above discussion highlights our top concerns with the pending legislation.  CJPME would recommend that, if they have not already done so, Committee members be sure to review the document issued by a group of Canadian NGOs entitled, “Bill C-47 and Canadian Accession to the Arms Trade Treaty: Civil Society Concerns and Recommendations.”  This document was released officially on Oct. 16, and was the result of deliberations between many of Canada’s leading NGOs on this issue, including CJPME.  It details a number of items that go beyond the scope of my presentation here today.

Through rigorous accession to the ATT, Canada has an opportunity to prevent unnecessary misery and suffering around the world as the result of unwise or illicit arms sales.  My organization and I exhort this Committee to propose the amendments necessary to ensure that Canada’s accession to the ATT adheres to both the letter and the spirit of the treaty.

Thank you for your attention. I welcome any comments or questions related to my testimony.